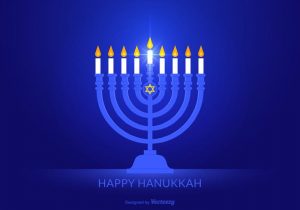 “Judaism is a fully experiential religion: We eat matzah, hear the shofar, smell spices at havdalah, light candles for Shabbat and holidays,” says Ruchi Koval, the co-founder and director of the Jewish Family Experience, the creator of Out of the Ortho Box and a certified parenting coach. “Crafts and other experiential activities, besides for being fun, imprint unforgettable memories in young children that are likely to remain positive associations long after and into adulthood.”

Hanukkah commemorates the rededication of the Second Temple in Jerusalem, following the Maccabean Revolt. According to the Talmud, Maccabees found only enough olive oil to keep the Temple’s menorah’s candles burning for a single day, but the flames burned for eight nights.

“Throughout the years, we’ve found new and creative ways to keep the holiday spirit flowing all through those eight days and nights,” she says.

Interested in trying your hand at a variety of Hanukkah crafts, games, food and fun? Here are 101 cool, cute, creative and crafty Hanukkah activities kids and parents will love.

4. Create a menorah out of cardboard tubes.

6. Explore a DIY Hanukkah sensory bin, like this one shown on 3Dinosaurs.com.

9. Make a Hanukkah playdate kit, like one Wilkenfeld has used with her children.

10. Allow your little one to use real candles or a child’s wooden menorah for Hanukkah candle play and to work on fine motor skills, says Wilkenfeld.

11. Use play dough to craft the four letters that appear on a dreidel. Marti Kerner, of Everyday Jewish Mom says, “The dreidel has four Hebrew letters on it. Rolling out play dough to make the letters of these shapes is a great way to play and talk about the letters.”

12. Wilkenfeld loves allowing her little ones to get imaginative and create menorahs and dreidels out of felt.

13. Play a number recognition game. “Hanukkah gives us so many great opportunities to count to eight,” says Kerner. “For this activity, we have a numbered menorah with coordinating numbered popsicle sticks for matching. You can also put the correct number of small items climbing up each candle.”

14. Let your child make their own menorah out of play dough, says Wilkenfeld.

15. Play with a Lego menorah, like this one from ModernTribe.com.

16. The most classic Hanukkah game is, of course, spinning the dreidel. “It is great practice for taking turns, counting, trying out the math concept of one half when you spin a ‘hey,’ developing fine motor skills for spinning the dreidel and dealing with the disappointment of not always spinning a ‘gimel,’” says Kerner.

17. Create your own dreidel board game.

18. Play pin the candle on the menorah, says Brown.

23. Make a clothespin menorah, like this colorful one on the blog Scrumdilly-do!

25. Make a cupcake menorah, like this adorable white and blue one from Avey.

27. Make Star of David sculptures out of popsicle sticks.

28. Hang those Star of David sculptures on a string to make a decorative garland.

29. Create a colorful hardware store menorah out of a block of wood, like this one created by blogger Sheri Silver.

30. Make a Hanukkah goodie bag, like the one shown by Rita on the blog Design Megillah.

34. Let your kids paint a free-form menorah or dreidels on a canvas.

35. Use pipe cleaners to make a Star of David.

37. Turn a used egg carton into an upcycled menorah.

38. Make your own Hanukkah candles with a kit from ModernTribe.com.

40. Organize a plate of fruit into the shape of a menorah.

41. Print out and fold a paper dreidel.

42. Make a dreidel out of a takeout box and cardboard tube.

43. Turn baby food jars into an upcycled menorah, as suggested by MomsandCrafters.com.

44. Mix your own blue play dough following this recipe from Tinker Lab.

45. Use Hanukkah-themed cookie cutters to mold your playdough into festive shapes.

47. Make a dreidel using cardboard and a pencil.

48. Make a menorah out of blocks and use tiny toys as “candles.”

51. Use an old container to make a tzedakah box to remember those in need during the holiday season.

52. Tape up paper chains in the shape of a menorah, like this one at Bible Belt Balabusta.

54. Make a banner out of those felt dreidels.

58. Cook up a batch of delectable latkes, says Wilkenfeld. Along with other fried foods, latkes are traditionally served on Hanukkah, as we celebrate the miracle of the Temple’s lamp oil lasting eight nights.

59. Make edible dreidels like these ones from Bible Belt Balabusta that use marshmallows.

63. Whip up a batch of blue velvet cupcakes.

65. Make Hanukkah lollipops, like the ones shown on Design Megillah.

68. Push pretzel sticks through marshmallows to make another type of edible dreidels, demonstrated by Avey.

70. Use tissue paper to make a stained glass menorah like the ones featured on Upper West Side Mom.

71. Make a Hanukkah bento box, like the ones on the Brass Paperclip Project.

75. Give Sufganiyot a New Orleans twist by baking Hanukkah beignets.

76. Make your own homemade gelt.

78. Spend the fifth night of Hanukkah making a difference by donating a night of gifts to a chosen children’s charity, as suggested by the organization Fifth Night. The organization’s goal is to help the little ones better understand and appreciate the importance of their donations by learning about the charity and the families who will be benefiting from their gifts.

80. Put on a play about the story of Hanukkah.

81. Work your way through this Hanukkah in a Box kit from ModernTribe.com.

83. Sing traditional songs, like “O Chanukah” and “The Dreidel Song.”

84. Pass out gelt and other Hanukkah goodies to neighbors.

85. Go to a menorah lighting ceremony.

87. Spend time as a family creating a Hanukkah memory book.

88. Have a Hanukkah pajama party.

90. Have a treasure hunt for gelt.

91. Each family member can find a treat in this Hanukkah Punch Box for that particular night of the holiday.

92. Draw cartoons of the Hanukkah story.

93. Write your own Hanukkah book.

94. Have the oldest person at the table — maybe bubbe or zayde — tell their first Hanukkah memory. Then, the second eldest, until the youngest shares theirs.

95. Read this kid-friendly version of the Hanukkah story.

98. Read “Dreidel Day,” written and illustrated by Amalia Hoffman, in which a sweet and playful cat encourages the reader to count to eight to celebrate Hanukkah.

99. Explore Hanukkah rituals with the help of whimsical bunnies in the charming, rhyming board book “Hanukkah Delight!,” written by Lesléa Newman and illustrated by Amy Husband.

100. Check out “Judah Maccabee Goes to the Doctor,” written by Ann Koffsky and illustrated by Talitha Shipman.