“They say it is better to be poor and happy than rich and miserable, but how about a compromise like moderately rich and just moody?”

Born Diana Spencer on July 1, 1961, Princess Diana became Lady Diana Spencer after her father inherited the title of Earl Spencer in 1975. She married heir to the British throne, Prince Charles, on July 29, 1981. They had two sons and later divorced in 1996. Diana died in a car crash after trying to escape the paparazzi in Paris on the night of August 30, 1997.

British royalty Princess Diana Spencer was born on July 1, 1961, near Sandringham, England. Diana, Princess of Wales, was one of the most adored members of the British royal family. She was the daughter of Edward John Spencer, Viscount Althorp, and Frances Ruth Burke Roche, Viscountess Althorp (later known as the Honorable Frances Shand Kydd). Her parents divorced when Diana was young, and her father won custody of her and her siblings. She was educated first at Riddlesworth Hall and then went to boarding school at West Heath School.

She became Lady Diana Spencer after her father inherited the title of Earl Spencer in 1975. Although she was known for her shyness growing up, she did show an interest in music and dancing. Diana also had a great fondness for children. After attending finishing school at the Institut Alpin Videmanette in Switzerland, she moved to London. She began working with children, eventually becoming a kindergarten teacher at the Young England School.

Diana was no stranger to the British royal family, having reportedly played with Prince Andrew and Prince Edward as a child while her family rented Park House, an estate owned by Queen Elizabeth II. In 1977, she became reacquainted with their older brother, Prince Charles, who was 13 years her senior.

As the heir to the British throne, Prince Charles was usually the subject of media attention and his courtship of Diana was no exception. The press and the public were fascinated by this seemingly odd couple—the reserved, garden-loving prince and the shy young woman with an interest in fashion and popular culture. When the couple married on July 29, 1981, the ceremony was broadcast on television around the world, with millions of people tuning in to see what many considered to be the wedding of the century.

On June 21, 1982, Diana and Charles had their first child: Prince William Arthur Philip Louis. He was joined by a brother, Prince Henry Charles Albert David—known widely as “Prince Harry”—more than two years later on September 15, 1984. Initially overwhelmed by her royal duties and the intense media coverage of nearly every aspect of her life, she began to develop and pursue her own interests. Diana served a strong supporter of many charities and worked to help the homeless, people living with HIV and AIDS and children in need.

Unfortunately, the fairy tale wedding of Princess Diana and Prince Charles did not lead to a happily-ever-after marriage. The two became estranged over the years, and there were reports of infidelities from both parties. During their union, Diana struggled with depression and bulimia. The couple’s separation was announced in December 1992 by British Prime Minister John Major, who read a statement from the royal family to the House of Commons. The divorce was finalized in 1996.

Even after the divorce, Diana maintained a high level of popularity. She devoted herself to her sons and to such charitable efforts as the battle against the use of land mines. Diana used her international celebrity to help raise awareness about this issue. She also continued to experience the negative aspects of fame—her 1997 romance with Egyptian film producer and playboy Dodi Al-Fayed caused quite a stir and created a media frenzy. While visiting Paris, the couple was involved in a car crash after trying to escape from the paparazzi on the night of August 30, 1997.

Diana initially survived the crash, but later succumbed to her injuries at a Paris hospital a few hours later. Al-Fayed and the driver were also killed, and a bodyguard was seriously injured. French authorities investigated the crash and the driver was found to have a high level of alcohol in his system at the time of the accident. The role of the pursuing photographers in the tragedy was also scrutinized.

News of her sudden, senseless death shocked the world. Thousands turned out to pay tribute to the “people’s princess” during her funeral procession. The funeral was held at Westminister Abbey, which was broadcast on television. Her body was later buried at her family’s estate, Althorp.

In 2007, marking the tenth anniversary of her death, her sons, Princes William and Harry, honored their beloved mother with a special concert to be held on what would have been her 46th birthday. The proceeds of the event went to charities supported by Diana and her sons.

Prince William and his wife Kate Middleton also remembered Diana when naming their second child, Princess Charlotte Elizabeth Diana, who was born on May 2, 2015.

Continuing her charitable efforts is the Diana, Princess of Wales Memorial Fund. Established after her death, the fund provides grants to numerous organizations and supports initiatives to provide care to the sick in Africa, help refugees, and stop the use of land mines. 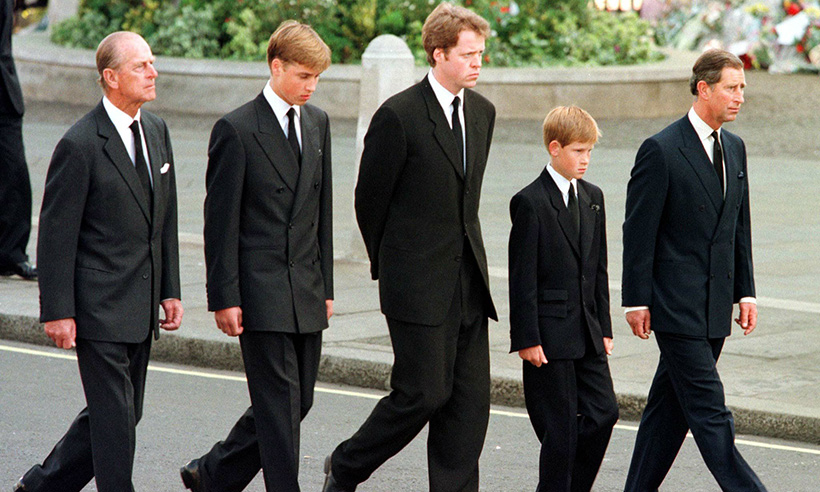