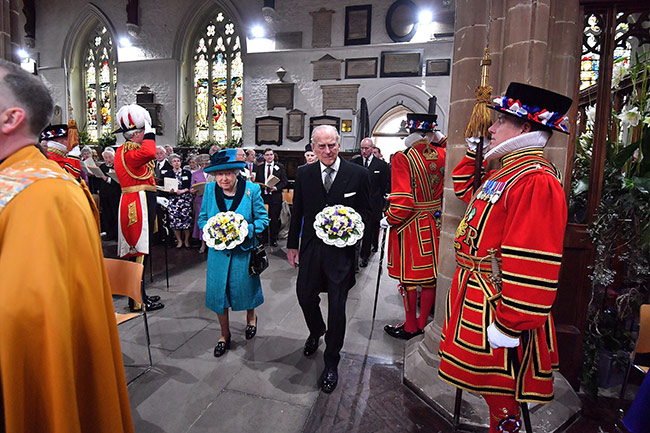 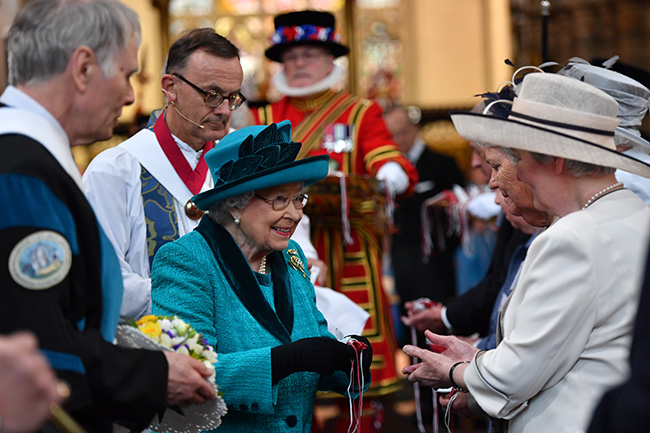 The Queen has attended a special service at Leicester Cathedral in celebration of Maundy Thursday. Her Majesty, accompanied by Prince Philip, observed the historical tradition of handing out Maundy Money to a group of 91 men and 91 women for the local community. But what is the tradition of Maundy Thursday, and why do people receive special coins? Maundy Thursday always takes place on the Thursday before Easter Sunday – the day on which Christians celebrate Jesus’ Last Supper. The Queen marks it by giving out special silver coins, known as ‘Maundy Money’ to local pensioners.

The number of recipients reflects the monarch’s age, and she travels to a different cathedral of abbey nearly every year to distribute the coins. The people who are chosen to receive the money have been recommended by clergy or ministers in recognition for the services to the church or local community. Each recipient receives two purses – one red, and one white. This year, the red purse contained a £5 coin, commemorating the Centenary of the House of Windsor, and a 50p coin commemorating Sir Isaac Newton. The white purse held uniquely minted money in one, two, three and four penny pieces, which equals 91 pence. While the money is legal tender, recipients usually prefer to hold on to the coins as a souvenir.

According to the Royal Mint, the custom of members of the royal family taking part in Maundy services dates back as early as the 13th century, when they gave out gifts and money, and even took part in foot-washing ceremonies to symbolise Jesus’ display of humility when he washed the feet of his disciples.

“Henry IV began the practice of relating the number of recipients of gifts to the sovereign’s age, and as it became the custom of the sovereign to perform the ceremony, the event became known as the Royal Maundy,” the website explains. “In the eighteenth century the act of washing the feet of the poor was discontinued and in the nineteenth century money allowances were substituted for the various gifts of food and clothing.”

“Maundy Money as such started in the reign of Charles II with an undated issue of hammered coins in 1662. The coins were a four penny, three penny, two penny and one penny piece but it was not until 1670 that a dated set of all four coins appeared. Prior to this, ordinary coinage was used for Maundy gifts, silver pennies alone being used by the Tudors and Stuarts for the ceremony.”