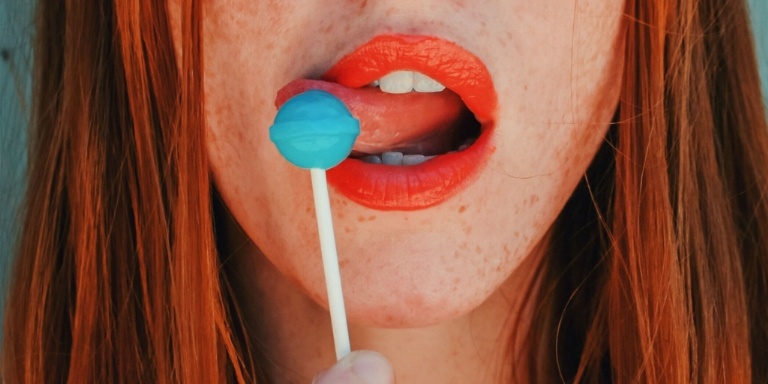 Staring down at a hard penis, knowing that in the next few seconds that thing will be in your mouth, can be intimidating. Like, every single time, not just the first time you give a blow job. But don’t worry, it gets better, and like all things in life, experience is so valuable when it comes to Ds in mouths. Also, if it doesn’t get better, just don’t give blow jobs. Men will live.

1. A penis doesn’t have eyeballs and can’t tell the difference between the back of a throat and the roof of a mouth. All those slimy surfaces on the inside of your mouth basically just all feel the same. Except your teeth, obviously. I don’t have a penis so I don’t personally get the appeal of “deep-throating,” but (gently) ramming the tip of his dick into the roof of your mouth feels like the same thing and it doesn’t make you gag.

2. A penis isn’t a vagina or a Slip’N Slide and doesn’t just get wet on its own. I mean there’s pre-cum, but that’s like a light rain shower when a proper BJ usually requires a torrential downpour. Either get some lube that doesn’t taste like a takeout bag, or drink some water and be prepared to use all the spit you can muster. It’s not gross. This is someone you make out with (probably).

3. You do not have to bow down before his erect penis like it’s a rising sun god. In movies and TV shows and whatever else, the only BJ position ever depicted is a woman on her knees, bobbing her head back and forth while a man stands up like a statuesque Greek god. This is so rare IRL! You don’t have to invest in knee pads, like Stephanie from seventh grade said you would! Stephanie lied to you. Just get on the bed and do it lying down. It’s COMFIER.

5. Your hands can pinch hit when your mouth needs some time on the bench. The average penis is 5.17 inches (when hard). I haven’t measured the inside of my mouth, but I am pretty damn sure there aren’t 5.17 inches of space between my lips and the back of my throat. And no way do I recommend going for broke and shoving a penis down your esophagus. Let your hands help. Put the tip in your mouth and your hands around the base, and voilà. This is within the acceptable rules of play.

6. You’re not going to accidentally bite down on his penis with your teeth and sever it and leave him sterile for the rest of his life. There are an inordinate number of horror stories about women who accidentally use their teeth during a BJ and, like, skin the guy’s dick with their razor molars or something. Teeth should not be the big concern. I feel like they kind of just disappear when this whole act starts, IDK.

7. Sometimes a penis doesn’t smell good and that’s because some men are disgusting. This is a 100 percent deal breaker, I can’t, no, can’t. I don’t think anyone expects a hard penis to smell like Chanel perfume or strawberry Lipsmackers or whatever (although OMG, they should) but some guys are less clean than others. Also. People sweat more in the summertime. Consider this. The crotch area is not free of sweat glands. Personally, I don’t think it’s rude to kindly suggest a sexy shower together beforehand.

8. Penises that look small and non-menacing sometimes feel like novelty-sized pool noodles when they are inside of your mouth. Oh, it looked like a pinky finger from afar, but now that it’s in your mouth, it’s like one of those little toys that grows when you put it in water. What’s happening in there? Who knows. Maybe we’re all overestimating the size of our mouth holes.

10. A blow job isn’t like a magic button that makes him come right now immediately. Although men do seem to love them, it’s not something that begins and ends in a matter of seconds (usually). These things can be a lot of work, especially if you’re down there for, like, 10 minutes. You can quit literally whenever you want though — never feel like you’re dropping out of a race early.

11. A BJ can be foreplay for men and doesn’t have to be the Big Main Event of the evening. Yeah, not all BJs have to end in a spout of geyser-esque ejaculate shooting forth into the air. You can just do this for, like, a little bit until he gets all riled up, and then move on to other sex things.

13. Literally no one can deep-throat without gagging. I vaguely remember some girl in, like, ninth grade telling me that all grown women literally swallow lidocaine or the stuff in those Orajel swabs before giving a blow job so they don’t gag on a dick. Don’t do this! Don’t drink lidocaine! No! The solution here is to just not deep-throat a penis. Gag reflexes exist for a reason. And you definitely don’t want to throw up on someone you ostensibly like.

14. You do not have to give a BJ just to get a BJ of your own. If a guy refuses to go down on you because you don’t like giving BJs, or he has a disgusting smelly penis that you don’t want in your mouth, or just for literally any other reason, he sucks (except lol he doesn’t suck hahaha get it?).

15. 69ing is terrible and overrated and bad, and let’s just ban it already. OK, maybe you like it but IMO, it is terrible and dumb. The whole point of oral sex is that you can just lie there and do nothing while someone else gives you extreme pleasure. 69ing is like if, while getting a professional massage, you had to also file your taxes at the same time. Doesn’t that sound like a nightmare to you? Because it is. It would be a nightmare.

16. It doesn’t make you a slut to enjoy giving BJs and it doesn’t make you a prude to hate giving BJs. This one sex act is way overblown (LOL, sorry, I’m sorry) but really it’s just one thing on an endless menu of sex things you can do to a person. No one decent will cut things off with you if you don’t like giving BJs, and I swear if anyone ever slut-shames you for liking BJs, direct them to me immediately because there’s a conversation we need to have. You like what you like and hate what you hate, and it’s all fine and good.