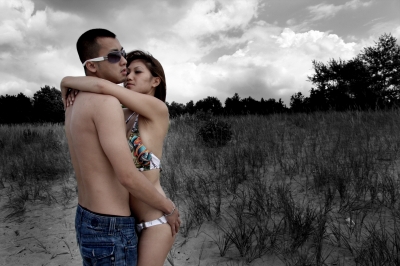 Attraction between the sexes, as complicated as it may seem, is pretty simple to explain in a few lines.

Girls are more easily attracted to a guy who appears healthy and stress-free, has a good level of testosterone which makes him appear more manly and chiseled, and has a protective streak in him which makes him a good mate material and a father.

Guys, on the other hand, are more easily attracted to girls based on their appearance or behavior.

But that’s not it though.

To truly understand how to attract men and how a man’s mind works, we need to get deeper into the concept of attraction from the male point of view.

How to attract men in a way they can’t resist

A guy may like a girl for different reasons, but when it comes to physical or sexual attraction at first sight, her physical appearance and her behavior matters more than anything else.

So if you want to attract a man and make him desire you, you just need to get his attention the right way. And the rest, as they say, is history!

You need to keep this in mind though, love and attraction are two completely different things. A guy may find you extremely attractive, yet he may not end up falling in love with you for his own reasons.

But for love to blossom in the first place, you need to build the sexual attraction before you make him fall in love with you. It’s the safest way to make sure the guy falls for you and stays in love with you.

Attraction and how a man views a woman’s body

As we know that physical attraction plays a very big part in attracting a guy, you need to understand what a guy’s mind tells him when he sees you and sizes you up.

When a guy sees a girl’s physical assets, he subconsciously sees more than just your breasts or your butt. The right curves in all the right places tells a guy that a girl is fertile and has come of age, and that she’s healthy because her body can afford to waste energy on developing her curves which play the biggest role in sexual attraction.

A guy may think a girl is attractive. But in his subconscious mind, he’s gauging you as the woman who may carry his offspring one day.

Testosterone and a man’s sexual preference

Every man produces testosterone, a sexual hormone, in his testes. And women produce a small amount of testosterone in their ovaries. The more testosterone a man produces, the more manly he looks and the more sexually virile he is. His facial features appear manlier, his jaws are wider and more chiseled and his voice is deeper.

And several studies have shown that the more manly a man is, the more attracted he’d be to women who exhibit feminine traits *girlie, cute traits*.

On the other hand, a small percentage of men who produce a lesser-than-normal amount of testosterone may find themselves getting more attracted to women who are less feminine and more controlling and dominant in the relationship.

So if you’re trying to catch the attention of a typical guy *a large percentage of men have normal or high production of testosterone even though the overall average testosterone levels have dropped significantly in American men over the last 50 years*, chances are, he’d love you if your behavior is more feminine, cute and girly!

A regular man who isn’t suffering from low testosterone would always find a feminine woman more attractive than a woman who thinks femininity is overrated and displays traits that are traditionally considered manly.

While a girl’s physical appearance is the biggest sign of femininity, at times, it helps if you can display more femininity in your behavior. No, I’m not saying pink frills and scented paper. But there are always other ways to appear cuter and get a guy to take a second and third look at you.

Men have always been the more aggressive sex in the human species. They’re usually the ones who spread their legs wider, stand tall and swell their chest up while trying to appear threatening all the time, more so when they’re in an argument or when they meet someone they see as a threat in any manner.

But cute changes everything. When a girl behaves in a cute and feminine manner, it brings out the protective instincts of a man. Instead of feeling threatened by a feminine girl, he feels protective about her. That makes him feel more masculine, and that’s something every guy loves to feel!

When a girl reveals her vulnerable side to a guy, it’s very hard for any guy to ignore her or avoid noticing her vulnerability. And the instant his mind connects with her vulnerability, it eliminates any thoughts of a threat and his protective side creates a bond of protection and attachment with her.

He feels the need to be around her, and his subconscious mind tries very hard to make her feel protected, comfortable and loved around him. He loses his aggressive stance, the tone of his voice softens down, and his shoulders droop down towards her instead of spreading wide. And before he even gives attraction a second thought, he’d realize that he likes the girl already!

Traits of a cute and feminine girl that draw real man

Many girls are against the idea of being feminine or behaving in a cute manner. To a typical feminist, behaving in a demure or coy manner is a sign of weakness. And they can’t accept that a guy finds a cute *and dare, we say it… submissive* girl more attractive than a girl who likes to be a non-girlie girl.

If you’re feminine, you don’t really have to be cute. But if you can pull off a perfectly cute personality, it would only add to your allure and make you more desirable among men.

To understand cute behavior better, all you need is to interact with a couple of Japanese or Thai girls whose behavior isn’t influenced by us Americans. They’re not meek or silly, nor do they have to behave like stupid bimbos to win a guy’s affection. All they have to do is flaunt what sets them apart, and that’s their femininity and grace.

Femininity comes naturally to some girls *not just Asian girls*, but it’s an art that’s worth learning. If you want to know how to attract men, all you need to do is exude your feminine side while talking to them. And once you try that, you’ll know what I’m talking about.

And remember, a cute girl who displays her feminine side will always have an edge over all other girls when she’s trying to catch the attention of a real man!

How to bring out your feminine side naturally

Femininity comes naturally. But cuteness can be created by the way you behave.

Additionally, if you’re on a date with a guy and want to come across as a girl who’s in touch with her femininity, here are a couple of tips for you.

#1 Dress in softer pastel colors like peach or mauve. The color will give your skin tone a healthy glow that makes you look warm and likeable instantly.

#2 Smile more often. A smile can make you appear more pleasant and friendly.

#3 Run your fingers through your hair delicately. Always works for any guy!

#4 Tip your head slightly downwards when you’re blushing or smiling, and look at him from under your eyebrow.

These four tips may sound bizarre for a feminist or a cute-bashing girl, but trust me, it will do wonders for your date!

Contrary to popular belief, don’t be yourself. Evolve.

When someone tells you that the best way to attract someone is by being yourself, well, they’re not entirely right. All of us change all the time. And not every change that we see in ourselves may be in the right direction.

Who are you? How would you define yourself? We are who we are because of our socioeconomic status, the people around us, and other influences we’ve had in our lifetime. A lucky few may have had the opportunity to be influenced by the perfect examples, while most of us have to change to become better individuals. Or worse, we never get to become better individuals  or achieve the full potential that’s within us because we’re convinced we’re all perfect already.

You don’t have to change yourself just to attract men, but change yourself to become a better you. Have you ever walked into a room full of attractive women, and found yourself thinking that a few of those girls were better than you in some way? When you meet a woman and find yourself in awe of her for any reason at all, it only means you admire and want some particular trait of hers that you lack yourself.

A girl who is the epitome of perfection in every way *if she does exist* won’t be awed by anyone else. On the other hand, everywhere she goes, she’d be the girl that would receive compliments, stares and awed jaws!

So change often, become the dream girl you fantasize about in your head, and be the girl you really want to be. And life will turn out to be so much better for you, be it about men, work, friends or anything else.

It’s easy to push a thought away and assume it’s wrong to be feminine or assume it’s a bad thing to change. But trust me, change is good. And change is inevitable. So you’re going to change whether you like it or not. And you have a choice to become a better you, or a worse you.

The last word about the science of attraction between the sexes

We’re all animals, and you shouldn’t forget that. We may be wearing pants or walking on two feet, but that doesn’t change our primal instincts. We still chase each other and woo each other just like the animals in the wild.

The male and female sexes still play games to win each other’s affection. Human males still like to woo a female through their display of brute strength, dexterity or their sheer awesomeness. And a man laden with male hormones wants a woman who’s graceful and feminine, because subconsciously, it makes him feel more like a man.

You don’t have to pretend to be dumb or weak, nor do you have to behave like the weaker sex just to attract a man. All you need to do is revel in your femininity and display your cuteness, and give the man you like a chance to bask in his manliness and show off his protectiveness!

Understanding how to attract men is really simple. Enjoy your femininity and let the world see it. The men will come, yes, they’ll come in droves!